Kinematics is a system for 4D printing that creates complex, foldable forms composed of articulated modules. The system provides a way to turn any three-dimensional shape into a flexible structure using 3D printing. Kinematics combines computational geometry techniques with rigid body physics and customization. Practically, Kinematics allows us to take large objects and compress them down for 3D printing through simulation. It also enables the production of intricately patterned wearables that conform flexibly to the body. Today we are releasing a jewelry collection and an accompanying customization app built upon our Kinematics concept. We’re also releasing a free to use app for desktop 3D printers.

Kinematics is a branch of mechanics that describes the motion of objects, often described as the “geometry of motion.” We use the term Kinematics to allude to the core of the project, the use of simulation to model the movement of complex assemblages of jointed parts.

Kinematics produces designs composed of 10’s to 1000’s of unique components that interlock to construct dynamic, mechanical structures. Each component is rigid, but in aggregate they behave as a continuous fabric. Though made of many distinct pieces, these designs require no assembly. Instead the hinge mechanisms are 3D printed in-place and work straight out of the machine. This project evolved out of a collaboration with Motorola’s Advanced Technology and Projects group which challenged us to create in-person customization experiences for low cost 3D printers. The genesis of the project is discussed at length in The Making of Kinematics.

a tale of two apps

We are releasing two web-based applications: Kinematics and a simplified version called Kinematics @ Home which is completely free to use.

The Kinematics app allows for the creation of necklaces, bracelets and earrings. Users can sculpt the shape of their jewelry and control the density of the pattern. Designs created with Kinematics can be ordered in polished 3D-printed nylon in a variety of colors. The Kinematics @ Home app is targeted at people who already have access to a 3D printer. It’s our first app that allows users to download an STL file for home printing. Enter your wrist size, style your bracelet and click print to receive a free STL file suitable for printing on a Makerbot or similar desktop printer.

Concurrently with the development of the online applications, we’ve been working on a more advanced software with broader practical applications. Kinematics allows us to design a shape and then fold it into a more compressed form for 3D printing. Items we’ve created so far are flexible, but rigid objects could be created by introducing a hinge joint that locks at a preferred angle. Here we present an example of how Kinematics can be used to create a flexible dress that can be printed in one piece. The process begins with a 3D scan of the client. This produces an accurate 3D model of the body upon which we draw the form of the desired dress. For this example, the top of the dress conforms exactly to the torso, but the skirt has a larger silhouette, allowing for the dress to drape and flow as the wearer moves. The surface of the sketched dress is then tessellated with a pattern of triangles. The size of the triangles can be customized by the designer to produce different aesthetic effects as well as different qualities of movement in the dress (the smaller the triangle, the more flexible the structure / the more fabric like it behaves). Next we generate the kinematics structure from the tessellation. Each triangle becomes a panel connected to its neighbors by hinges. The designer can apply different module styles to these panels to create further aesthetic effects. Finally, we compress the design via simulation so it fits into a 3D printer. This means that an entire gown, much larger than the printer itself, can be produced in a single assembled piece. The simulation uses rigid body physics to accurately model the folding behavior of the design’s nearly 3,000 unique, interconnected parts and find a configuration that fits inside the volume of the printer. Each jewelry design is a complex assemblage of hinged, triangular parts that behave as a continuous fabric in aggregate. Kinematics jewelry conforms closely to the contours of the human body. This is 21st-century jewelry, designed and manufactured using techniques that did not exist just a few years ago. Kinematics pieces come in four styles: smooth, angular, polygonal and tetrahedral. Each design takes its name from the module style and number of pieces in the design. For example, Tetra Kinematics 174-n is a tetrahedral style necklace composed of 174 unique modules.

We’ve added eighteen Kinematics designs to our shop, and a limited initial run of each is currently available for purchase. Kinematics jewelry is made of polished 3D printed nylon in a variety of colors. Necklace, earring and bracelet designs are available; the bracelets and necklaces are fastened simply and securely with hidden magnetic clasps. Prices for the collection range from $25 to $350 and most pieces cost less than $100. 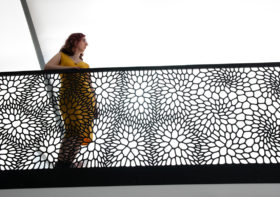